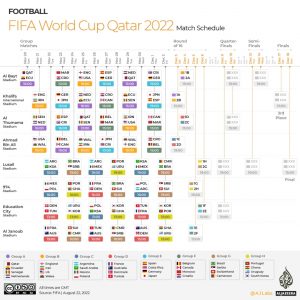 The FIFA World Cup 2022 will take place in Qatar from November 21 to December 18, with matches being held at seven different stadiums across the country. The opening match and final will be held at the Lusail Iconic Stadium in Doha, while other venues include Al Bayt Stadium, Al Janoub Stadium, Khalifa International Stadium, Education City Stadium, Ras Abu Aboud Stadium, and Al Thumama Stadium.

Fans can expect an exciting line-up of games, with teams such as Brazil, France, Germany, Spain, and Argentina expected to compete for the coveted title of World Cup champions.

Stay up-to-date on all FIFA World Cup 2022 news and announcements by following FIFA’s official website and social media channels. And start planning your trip to Qatar now for the chance to witness history in the making at FIFA World Cup 2022.

The FIFA World Cup is an international football tournament held every four years. It is the most widely-viewed sporting event in the world, with over three billion people tuning in to watch the 2014 tournament. This year’s FIFA World Cup will be held in Qatar, and 32 teams have been broken down into eight groups. The top two from each group will qualify for the knockouts. Here is a complete fixtures list for the tournament. All kickoff times are local Qatar time (GMT +3), and you can add the whole schedule to your iCal account or your Google Calendar app. So make sure you don’t miss a single minute of this exciting event!